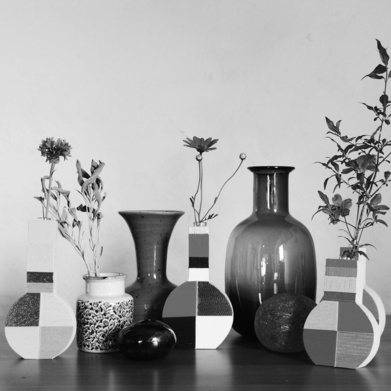 Mizuhiki is made with spinning code made of traditional Japanese paper and silk. It is used in Japanese celebrations and rituals, other events related to Shintoism. Ritual is a project using “Mizuhiki” that utilizes the skills of Japanese artist Shingo Nakata. The Mizuhiki strings are considered as an exquisite material that customizes itself according to the needs of society, and this project explores to seek new expressions of the potentiality of this material.

The English word “RITUAL” was used as a brand name to express the traditional aspect of Mizuhiki. The fluid components of Mizuhiki fused with original artistic expressions and created new artworks including objects and jewelries.  Their atelier is located in Iida City in the Nagano prefecture, a historically enriched district that has produced Mizuhiki since the early 1600s.